Happy Hump Day, all!  We are back from our one year anniversary trip to Connecticut, and all ready for the fall season, aka the best time of the year!  Well, I am ready.  Anthony is probably passive about the season, and less than enthused about my need to decorate and take too many photos.  But hey, it’s the time of year.  From now until the new year, I will be running on the holiday hap-hap-happy high over here.  Is that I thing?  I don’t know.  But I gave up caffeine last month so, it better be.

Anywho, whilst back in the mother land for the week, aside from spending plenty of time at Mohegan Sun,

and eating the top tier of our wedding cake, (finally!) 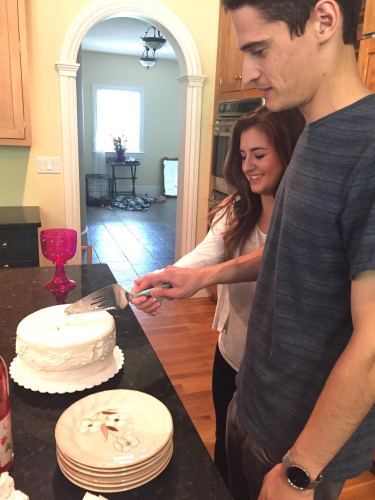 priority numero uno was to make a stop in good ole Mystic, Connecticut to secure the annual photo!

I like–nay– love traditions.  Documentation.  Commemorations.  You name it.  I pretty much get a hard on for anything memory or tradition related, so imagine my pleasant surprise when I saw one that fell into place completely by accident. 😍

I probably mentioned all of this in my first time lapse post a couple years ago, but for some refresher, Anthony was my first serious boyfriend.  I also decided in my head the night I met him that he was the “forever” material, so once we were into our second year of dating, I found myself wishing we had something– a tradition of sorts, that we had done every year, aside from the standard anniversary.  Turns out, we did!

It started out as us getting a picture in a spot that both looked alright (minus the aforementioned blemishes) and had a spot for me to put my camera so we could self-timer that bad boy.

By the time the third year rolled around, it became something we felt we had to keep up.  The photographer in me had all these plans to decorate our future home with them scattered throughout a gallery wall, a timeline of us and all that cheesy stuff that I eat right up for breakfast.

For our fourth summer together, if it were possible to make me look even shorter, my cousin did it by cutting off my feet.  Hehe.  This was our first Mystic photo as a married couple, taken just two days after our wedding, actually!

And this year’s!  Probably the closest to our first one, just a little better of an angle.  So I think the trick is to have your mom take the photo.  Your mom, or a tree stump.  Thanks Momma!  Best one yet!

I have been head over heels with annual photos ever since this happy accident, and I can’t wait to start adding some kids into the mix!  Well, someday.  Obviously not this year! 😂

What kind of traditions do you and your family have?  Lay ’em on me! 💖

I hope everyone is having a great week so far.  Fall is in the air, and it will be pumpkin flavored everything before we know it!  Stay tuned, one of these days I’m going to start posting some vlogs!

Hi! I'm Sam! I'm a 30-year-old wife & new mom navigating my way through the murky waters of (faking) adulthood. Join me as I try to figure out how to get through a recipe without setting off the smoke detector, & get through a blog post without swearing.

No cheerio left behind. . . . . . #babelincoln #quarantine #covid #covid_19 #quarantine2020 #stayhome #cheerios #naturespromise #noms #canon #canonbrand #canonusa #canon6d #canon35mm #humpday #happyhumpday #wednesday #sameday #everyday #cereal #lunchtime #8monthold #happybaby
The upside of quarantine. 🙂🥰 #babelincoln
Bears coming out of hibernation be like... 🐻🌨 #babelincoln
Imitation Iced Chai Latte 🍵 for those good little boys and girls staying home. (Grande) ▫️2 chai tea bags steeped in 6-7oz hot water ▫️steep until cool, wring out tea bags ▫️add 8oz milk & desired amount of ice ▫️sweeten to taste Tastes better, is healthier & definitely cheaper. Bonus: you don’t risk spreading or contracting coronavirus! ✨🥴 I’m wearing my green apron next time I make one of these. #covid19 #quarantine
Day 5. Looking suspiciously similar to days 1-4. #babelincoln #covid19 #quarantine
Happy St. Patrick’s Day! 🍀☘️ First picture is Lincoln’s response to people staying home aside from essential outings. 😃 Second picture is Lincoln’s response when I asked him why people are still advertising their normally functioning businesses. 🤷🏼‍♀️ Third picture is Lincoln judging you if you’re one of those people. 🤨 Make those St. Paddy’s Days LIT with takeout if you need to, or by getting drunk at home. You don’t have to physically go to work tomorrow anyway. And if I can function hungover, anybody can. 💁🏼‍♀️ #hotmess It’s temporary guys. Let’s all try our best to keep it that way. It might feel hard now, but it’ll be 10x worse and harder to recover if it becomes a much longer, government mandated lock down. 💚 #babelincoln