In September of 2014, I learned we were going to be moving to Wisconsin in the new year.  My older, wiser self now sees what a rare gem of an opportunity this was and continues to be.  And if I could do over, I would have skipped so many more holidays.  So many more. 😃

But alas, the glass was half empty for 25-year-old me as I proceeded warily through my “last few months” in Connecticut like an inmate on death row.  Imagining all the ways and times and reasons we could finagle trips back home during this 3-5 year sentence was my primary coping mechanism.

“We aren’t moving till January and my mom is coming in February and Anthony’s mom is coming in March and we are going home in April for Easter and July for the 4th and September for the wedding and November for Thanksgiving and December for Christmas and New Years, and then just like that one year will be over and, and, and—“

For the next two years we would make the trek by plane or car for the major holidays, but the most memorable were, of course, Thanksgiving and Christmas. 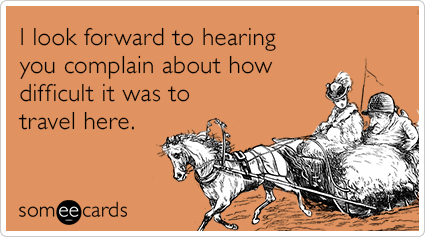 Christmas was great.  I’ll always be home for Christmas.  Every year no matter what.  And I’ll do so in a semi-constant euphoric state.  I spend 10.5 months of the year waiting for that season, so nothing will keep me away from home for the holidays.

Sidenote: I wonder how many Christmas song titles I will inadvertently use in this post as I try desperately not to play them in early November despite the forecasted snow for later on today. 🎄

However both Thanksgivings stick out in my mind for two reasons.  One being the blood-boiling log jam that is I-90 east through Chicago any day, let alone the day before Thanksgiving.  Both years I have distinct memories of doing my part to alleviate stress and not cause more by saying helpful things from the passenger seat of the car ride through hell.

“Never again.  Never a-f*cking-gain are we doing this.”

“F*ck Thanksgiving.  Every human on the planet is on this highway right now.”

Seriously.  This isn’t even a real holiday.  It’s a speed bump on the way to Christmas, and it’s only a matter of time before someone decides it’s racist and tries to cancel it with every other joyful f*cking day in life.

“If we miss dinner I’m literally going to die.”

“Next year we are staying home. Staying. Home.”

“Why does rush hour start at 3:30PM literally NO ONE WORKS TILL 5 ANYMORE F*CK.”

I don’t like to brag, but I think I’m actually the best possible copilot you could have with you on a trip in the car on a time crunch.  Please, let me drive you to the airport sometime when you are trying to catch a flight.  🙆 #zen

Luckily, once we get through Chicago (which, funnily enough the year we aren’t going home is the year they finish and open the expressway that probably saved us an hour of travel this past September) we basically fly at 85mph all the way through until New York, and then hit traffic in Connecticut and are instantly reminded why we left in the first place.

Ha, just kidding.  I wish the real reason was so rebellious and witty.

So, aside from the minor traffic hiccups and that time that it made us 15 minutes late returning our rental car costing us a late fee the day before Thanksgiving (cough Avis cough) we were able to, thankfully, make it there safely and in one piece.

But nonetheless, travel is reason numero uno why we will be skipping all of that this year!

Number two?  Avoiding the family .  To be continued in this post due to excessive wordiness.

3 thoughts on “2 reasons to skip thanksgiving.”